Tola Talks about the best exercises you can do using a stool…with clips from his Stay Zen web series on exactly how to do them. So don’t be a stooly and check-out the Top 10 Ways to Workout with a Stool. Plus special shout-outs to Lady Gaga and all the Fifty Shades fans.

I was speaking with another gym-rat this morning, i.e., those of us who frequent the place every single day, who said it’s that time of year again when people just “play it in their head”. 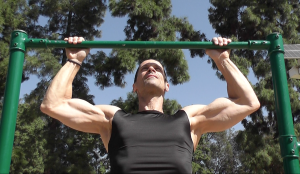 Meaning, most people visualize themselves exercising and going to the gym and taking Yoga or Pilates classes…but they never do. Like my friend said, they just play it in their head but rarely follow through. Albeit, they may have good intentions and would love to see themselves working out to the point of even dreaming about it, but they never do.

Why? Well that’s an easy tough one. It’s easy because people lack the desire and the discipline to exert and fatigue their bodies on a regular basis. It’s also tough because life’s so busy that who has the time or the energy to commit 30 minutes to an hour every single day on fitness.

So keep it simple and start small, like 15 minutes a day. That’s what I say, and pretty soon you’ll be addicted to it and want to exercise more. Trust me, having a Strong Body – Clear Mind is addicting. And at the very least, spend 5 minutes every day doing push-up, sit-up or pull-ups.

Don’t just Play it in Your Head. Turn those visions into reality and keep-on rockin! Peace – R