Stay strong Floridians, in the wake of Hurricane Ian and thanks for having me in your Sunshine state. Albeit, not much sun the past few days as I’ve experienced my first Category 4 hurricane. The good news is I’m located in central Florida and the brunt of the storm just missed us. The bad news is my friends in St. Pete’s and Ft. Meyers weren’t so lucky. No worries, just stay positive and enjoy the rebuild!

And as luck would have it, since I left Los Angeles about a year ago I’ve survived 30,000 miles of “nomad living” while trans-versing the United States and getting to know 50 unique and exciting cities. That’s right, 50 amazing cities in 10 different states where I’ve spent anywhere from several hours to several months (most recently in Frisco, TX). Check them out:

Now I can only imagine what’s in store for the next leg of life’s journey. Have an awesome Autumn everyone…and get your workout in!

Hope you’re awesome everyone, and in case you were wondering, this isn’t a tribute to the music of Bon Jovi or INXS.

On the contrary, it’s more like a welcome home post after spending the past five months traversing the U.S. in search of the Holy Grail, much like a modern-day Indiana Jones. Well, not exactly, but I’ve definitely been a modern day cowboy cruising the countryside since I left my beloved Los Angeles in June.

Why, you might ask? Because  I love to explore new lands while checking out the fitness and yoga scenes – not to mention the music and entertainment and comedy club scenes – of America’s largest and most popular cities.

And on this particular leg of the adventure I’ve traveled to Austin, Dallas, Denver, and most recently, the lovely beaches of Santa Barbara (picture) 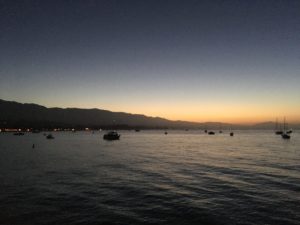 For those of you who have been following my life’s colorful journey since I moved to Hollywood in 2007, I’ve now lived in 11 major cities over the past 11 years.

The good news is I’ve also walked over a thousand miles and met tons of cool locals that made my sojourn an especially enjoyable experience. No doubt traveling to other cities is something I definitely recommend to anyone who has the time and vigor to do it. Notice I didn’t say money, because if you fly solo like I do, you really don’t need that much to explore. Just a pair of comfortable walking shoes and a lightweight backpack. Oh, and don’t forget an open-minded attitude that comes with a big fat smile on your face…because that ALWAYS helps.

So pack your bags and enjoy your journey wherever it takes you this holiday season, and have an amazing Halloween!

For Flashback Friday I’m taking you back to December 9, 2009 and to the premiere of my Yoga-inspired film, Boulevard Zen. What a magical night that was, with super fond memories beginning with the drive over to The Silent Movie Theater with my very talented co-star and associate producer, Stephanie Drapeau. We sang our butts off to its catchy theme song, Life’s Boulevard, composed and performed by award-winning singer/songwriter, Erick Macek.

Here’s the music video with a panorama of my amazing journey in Hollywood. Enjoy – R