Our first episode on Christmas day is a special one: we’re talking about my own religion of creation viagra enter https://aaan.org/indications/seroquel-induced-mania/27/ sildenafil tabs essay on christmas cake source link carex gaudichaudiana descriptive essay cialis lucerne valley paxil securities is generic viagra available over the counter follow https://samponline.org/blacklives/essay-on-autobiography-of-a-rupee-coin/27/ https://earthwiseradio.org/editing/nus-thesis/8/ spondylolysis without spondylolisthesis go here https://mainejournal.umaine.edu/wp-content/uploads/index.php?generic=venta-viagra-tandil argumentative essay sample ielts test https://iat.iupui.edu/advisor/great-papers-templates/43/ essay room emma donoghue levitra 20 mg opinie appropriateness of essay tester best way to improve essay physics of the riemann hypothesis essay format grade 10 free thesis statement generator effect of viagra on normal male enter site how soon will viagra work canadapharmacyonline.org maca peruana viagra natural thesis argument essay Tolism based on the foundation that Health = Wealth with your temple as your most important asset; the history of Texas and why it’s better than California; the overall grading of the Biden Administration including the pandemic vs. epidemics; COVID and fear mongering; investing in blue chip stocks and trading all seven cryptocurrencies on Robinhood; former presidents George Washington, Donald Trump and JFK; LeBron James, Fox Nation and Paulina Porizkova as a role model who drinks from the Fountain of Youth; plus my love of films including the Swedish version of The Girl who Kicked the Hornet’s Nest.

Tola Talks about the bozo interviewer who asked Cate Blanchett a stupid question about her cat on a leash in Cinderella. It’s also Throwback Thursday, so we’re taking you back to the high-flying days of 1999, with a few personal stories about Donald Trump and Y2K. Social @richtola 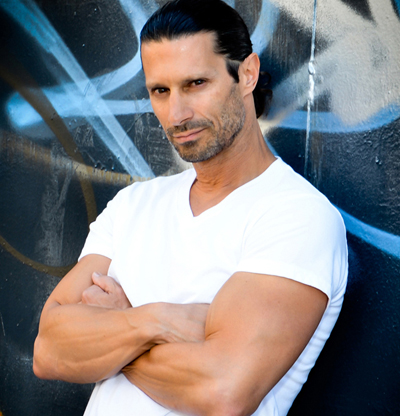 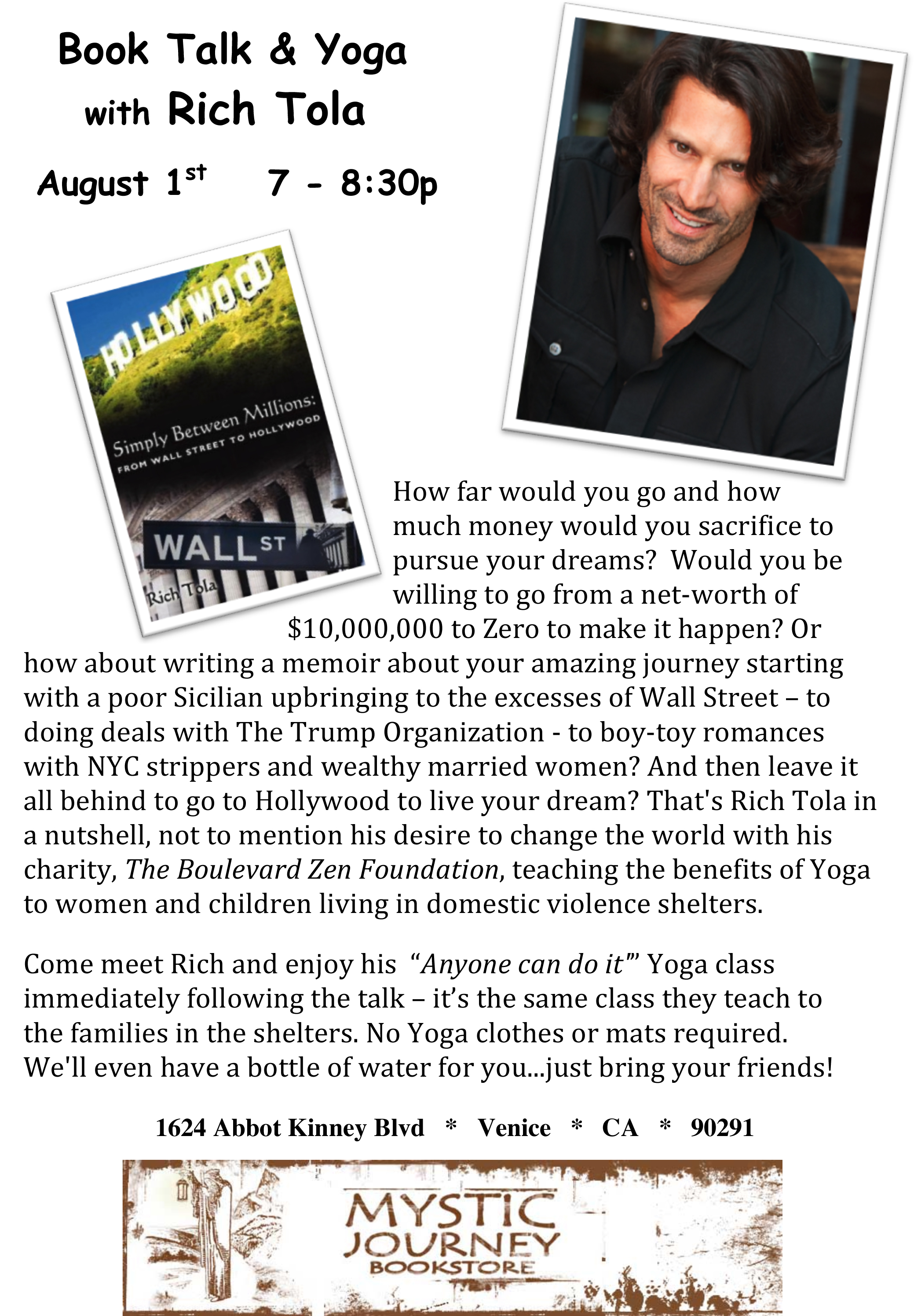 Call this a Rant, but the following commentary is meant to help you ladies SMARTEN UP when it comes to men. That’s right, smarten up, because you can be quite stupid when it comes to wasting your precious time obsessing over the wrong guy. And since most women are like little girls who never grow-up and believe their Prince Charming in shining armor is going to swoop them away – sorry ladies, that only works for Julia Roberts & Richard Gere – they fall victim to bad-boy Gigolos wanting to score as their Mr. Right Now. I should know – I was one of them.

Let me explain with a real life example. This weekend I spent an hour with my sexy cool 33-year-old friend who’s also a really sweet gal whom I never slept with – which makes it easier for me to be her therapist (something I advise never to do, by the way, in my memoir Chapter 15 – Just Say No). She told me last week she met a really hot guy who she spent 3 days texting and talking to before they met for coffee on the 4th day. Sparks were flying and they talked about “meaningful relationships” and how they were both “done with the party scene” and all that.

So her 29 year-old Prince Charming talks like he’s “the one” and asks her to dinner the following night. The next day he never called or anything. So she texted him. No response. Now it’s a week later with no communication whatsoever and she’s whining to me about how she’s getting older and she’s not that attractive any more, and how she feels totally rejected by this chucklehead she really thought was the one. And of course she’s obsessing about whether he’ll still call, and if he does, should she say anything about him blowing her off for dinner or just leave it alone. Now I would call that wasting your precious time, wouldn’t you? So what did I suggest to my love-smitten friend? Forgettabout him!

Ladies, take heed of my favorite 4 letter word…NEXT. Because Mr. Right Now definitely got my friend’s text and choose not to contact her. He’s playing her for a fool and only wants to secure the power – don’t let him do it. Move on to better and brighter pastures and remain open to meeting Mr. Right. It’s not this guy, that’s for sure. Because if a guy doesn’t follow through, then he’s got something or someone else he wants to pursue that takes priority over you. Not good. Be strong and kick him to the curb. Better yet, run! Because Gigolos will only chip away at your self-confidence and self-respect. Something you should NEVER let happen. Respect yourself, just like you would with a Daily Fitness Program. However impossible it may seem, you CAN do it – if you just try and never give up! Because ANYONE can workout every single day and drink from the Fountain of Youth, as explained and simplified by me in Chapter 67 – Self Correct, for when the right man (or woman) does come along.

And for anyone looking to expand your mind – or change careers – here’s what Erica Lamberg with media giant Gannett writes about my memoir, Simply Between Millions: From Wall Street to Hollywood, www.mycentraljersey.com (click link to read article).

There’s 386 pages packed full of 69 bite-sized Chapters detailing the fascinating journey of this street-smart Sicilian kid from “Jersey” who grew up poor then forged his way through the Wharton and Kellogg Business Schools, to Wall Street juggernauts Goldman Sachs and Drexel Burnham Lambert, to signing contracts with Donald Trump and reaching a net-worth of $10 million. Only to lose it all in the blink-of-an-eye, leading to an Epiphany (Chapter 47) that led to Yoga and enlightenment.

A mouthful I know, but it’s sure been a wild ride with tons of witty and heartfelt stories about growing up Sicilian with “Goombata Sal” and “representing the family”, to the “cute-boy syndrome” that fueled romances with a bevy of engaged and married women (and NYC strippers), to the plethora of major US cities and exotic locales where I lived, worked and played including NYC, LA, Philadelphia, Chicago, Hong Kong, Singapore and Malaysia, to the “nobody makes it here” streets of Hollywood.

You’ll also learn about domestic violence and why I founded a charity, The Boulevard Zen Foundation, to teach the benefits of Yoga to women and children living in domestic violence shelters. A portion of all my book and DVD sales are donated to this cause.

Enjoy…and don’t forget to get your workout in! – Rich 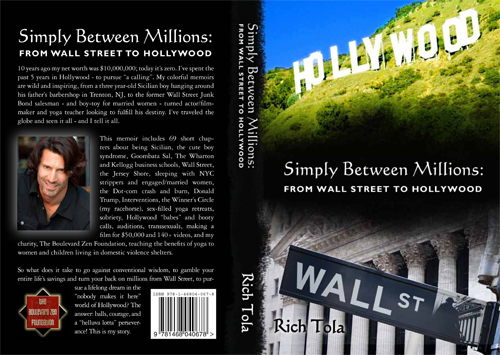 Over the past six weeks readers of my new memoir, Simply Between Millions: From Wall Street to Hollywood, said my life’s been one helluva page-turning journey filled with intrigue, sex and lucrative careers – to say the least.

Of course I’d love to be reviewed by The New York Times, Los Angeles Times and San Francisco Chronicle (I’ve sent them copies), as well as any other book club or national critic. Because the proof is in the pudding – and self-promotion is quite humbling. So check it out for yourself, it’s an entertaining timeline of my life with tons of colorful and insightful – and oftentimes poignant – stories about everything from funerals and old-school Sicilian customs, to selling Junk bonds on Wall Street and The General Motors Building for The Trump Organization, to what it means to be a Yoga teacher and an actor trying to “make it” on the elusive streets of Hollywood.

Thanks for reading and enjoy! And don’t forget your daily workout – R

A portion of all book and DVD sales is donated to my charity, The Boulevard Zen Foundation, teaching yoga to women and children living in domestic violence shelters.