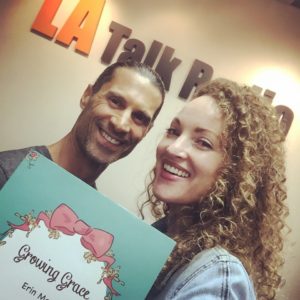 Congratulations to author, psychotherapist, yoga teacher and my dear friend, Erin Mason, for publishing a tender and heartwarming story, Growing Grace, about adoption from the biological mother’s perspective.

Tola also Talks about America’s obesity epidemic and how it affects 36% of all adults and nearly 20% of all children and adolescents, and more specifically, how I would financially reward everyone for being fit…If I Were President. Not to mention fitness tips for losing that unwanted weight.

Subscribe on iTunes, Google Play and Stitcher. And have an awesome day! Peace – R

Kudos to everyone who packed the house in support of our 12 Ladies of Christmas Holiday Show at Chicago’s Two Hearted Queen, and thank you to the very funny and very talented performers who donated their time and energy to make it an awesome event!

As your host/producer who always appreciates the opportunity to impact the lives of youngsters – as well as anyone else who’s open to it – the best part of the night took place right before our raffle drawing, while teaching young Nathan the proper way to shake hands.

Tola Talks kudos to Michael Jordan for making the Forbes World’s Richest Billionaires list for the first time and IHOP for free pancakes on National Pancake Day. Plus exploding iPhones, Jon Stewart kicking the “cojones” out of WWE’s Seth Rollins, and the Top 10 Family Charity Ideas.

Tola Talks about the suicidal parents in Utah, the Super Saturn with gigantic rings, Apple Computer making money hand over fist, and the wacko actor in Toronto who got arrested for voyeurism. On WTF Wednesday, Rich also celebrates the 30 year anniversary of the hit charity single, We Are The World, by Lionel Richie & Michael Jackson. Watch @ youtube.com/tolatalks

Tola Talks all things Dating with guest co-host and Relationship Expert, Jennifer Gaynor-Yaker. On Top 10 Tuesdays, Rich also talks about the FBI posing as The Seattle Times to catch a suspect, windowless planes making air travel more cost-effective, National Chocolate Day, YouTube launching a paid subscription service, plus the Get Your S#!T Together Award to a single Mom who left her infant children alone in her 100 degree car to attend a job interview.

We owe it to our children and future generations to stop the cycle of domestic violence. So if you’re an abuser – or most importantly a victim – take heed from my charity, The Boulevard Zen Foundation, and Get Your S#!T Together with the healing powers of Yoga.

We’ll soon begin a 30,000 journey across America visiting all 50 states – 100 Cities in 100 Days – to raise money for my charity, The Boulevard Zen Foundation. We teach yoga to women and children living in domestic violence shelters. Ambitious? Yes. For a great cause? Yes. Impossible? Certainly not! I expect it to be life changing. For all of us, as well as all of you because we intend to EDUCATE, INSPIRE, EMPOWER and ENTERTAIN you with cool, trivia-filled workout videos from historical sites everywhere.

Here’s me teaching the women and children at the San Diego domestic violence shelter:

“Holy expanding waistline Batman, America just keeps getting fatter”. Now if you’re a fan of the infamous Caped Crusader and read this morning’s newspaper, this is definitely something Robin would say. Because in today’s Los Angeles Times, a new report on our nation’s weight crisis – as prepared by the Robert Wood Johnson Foundation and the Trust for America Health – says “16 states are experiencing steep increases in adult obesity, and none has seen a downturn in the last four years”. So what’s up with that? With an obese population of 19.8%, Colorado is the ONLY state with an adult obesity rate below 20%. Furthermore, “adult obesity rates have doubled or nearly doubled in 17 states. Two decades ago, not a single state had an obesity rate above 15%. Now all states do.” But no worries folks…help is on the way! Soon my team will embark upon my FAT BURN AMERICA TOUR, visiting every state in America, 100 cities in 100 days, filming my fat burning workouts to promote daily fitness & yoga, and to raise much needed funds for my charity, The Boulevard Zen Foundation. As you know, we teach yoga to women and children living in domestic violence shelters. And since the report also states that “obesity remains a condition disproportionately affecting those with poor education and income, and closely tied to minority status”, it’s all the more reason to bring my FREE Fat Burning Workouts to the public. Our goal: to EDUCATE, EMPOWER, INSPIRE and ENTERTAIN. So get ready and get set with today’s 5 Minute Fat Burning Workout #94 – Leg Stretches. Enjoy and we’ll see you soon! – R

Yesterday I taught a one-hour fat burning class at a domestic violence shelter in San Diego on behalf of my charity, The Boulevard Zen Foundation.  I was excited to teach about ten children (ages 3 – 12), with a few ever-so shy moms and grandmothers too.  It was certainly a family affair, with the kids leading the charge!  Since I don’t have any children of my own – at least not yet – I’m always fascinated by the pure joy kids find in the simplest of activities.  And with their moms and grand-moms joining in, they had FUN, regardless of how challenging it was.  Simply put, Fitness + Family = Fun.  So gather your entire family today and enjoy strengthening your legs, and your family bond, with my 5 Minute Fat Burning Workout #85 – Chair Twists (the exact same exercises we practiced at the shelter).  And have fun!  – R