Today is all about doing whatever it takes to never live in fear. Because during the past two years of this COVID pandemic, the powers to be have done their best to control you by instilling fear in your mind, body and spirit. No doubt fear controls – so never let it happen. In our last Tola Talks Texas, at least for now while I travel and spend time with family, I do my best to communicate why we need to get rid of the divide between the vaccinated and unvaccinated. Plus kudos to Bill Maher for his recent monologue about not wanting to live in a masked, paranoid world and never being scared of COVID, but rather the reaction to it. Not to mention this particular comment that I totally agree: So, the fact that America, the medical establishment never even attempted to get people to live a healthier lifestyle as response to this pandemic is a giant scandal to me. Right on Bill, because everyone needs to get with the program and Drink from the Fountain of Youth, like I do. And no matter what, stay strong, stay positive, stay true to your dreams…and get your workout in.

When I told my buddy I wasn’t vaccinated and was never getting the jab, he said, “Then it’s either Texas or Florida if you want to lead a normal life.”

Normal life, as in freely or being allowed by law, including going to the gym, nail salon, movie theatre, shopping mall or any bar or restaurant in the city. Talk about a quintessential What-The-Fcuk. I mean, one of our nation’s greatest Presidents and spokesperson for democracy, Thomas Jefferson, would roll over in his grave with such “tyranny over the mind of man” exhibited by today’s government officials.

Because in my book the COVID mandates of Los Angeles are not only ridiculous and unjust, they’re also a form of tyranny or “arbitrary or unrestrained exercise of power”, as defined by the dictionary. Most importantly, these mandates prevent me from living a so-called normal life, which includes working out every single day plus walking 10+ miles a day since COVID began. Not to mention I’m at my ideal weight with less than 10% body fat, a blood pressure of 110 over 60, plus a great bill of health from my doctor. Oh yeah, I’ll be 59 in March and I’ve never taken a daily pill in my entire life – medicine or supplement. And don’t forget I wrote the book on How to Drink from the Fountain of Youth: 30 Steps to Everlasting Youth. So why do I need to inject myself with something that isn’t necessary? Forgettaboutit.

So there you have it California, you leave me no choice but to leave you after 15 glorious years. Albeit, it’s more like you kicked me out after 15 hard-working and dream chasing years.

Here I come Texas, with my new horsepower and anything is possible attitude. And no worries to anyone who thinks like I do and remains committed to living a fearless and vaccine-free life, all the while treating your most valuable asset, aka your Temple, with the utmost respect.

Happy Veterans Day everyone…and get your workout in! Peace – R

Hey everyone, hope your summer’s off to a great start and you’re keeping with those daily workouts.

No worries if not, just have a listen to my interview with Speak Up Talk Radio host, Pat Rullo, and get inspired to Drink from the Fountain of Youth…because ANYONE can!! 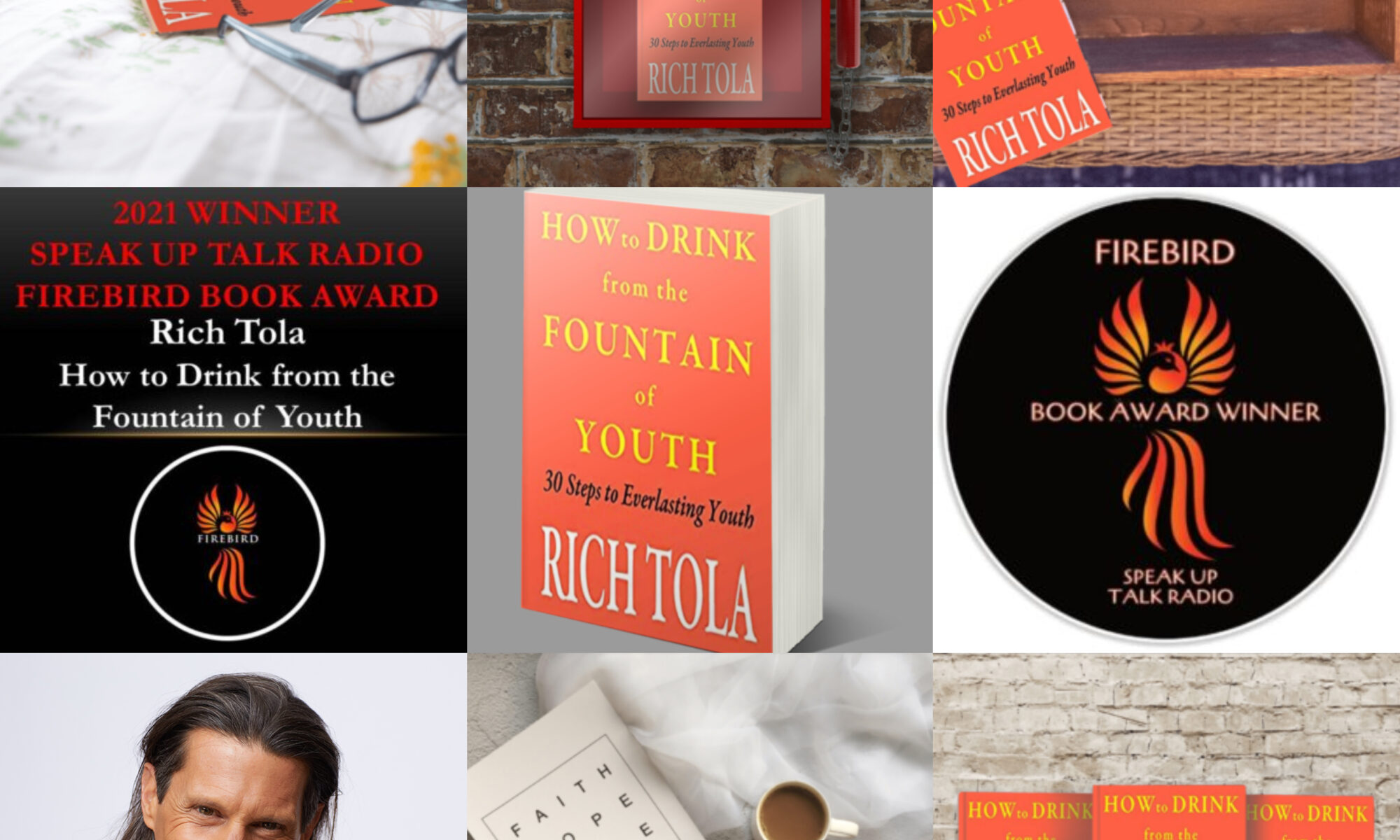 One of the winning entries was from California author Rich Tola whose book titled How to Drink from the Fountain of Youth: 30 Steps to Everlasting Youth, won in the Aging and Mind/Body/Spirit categories.

Authors and publishers from around the world submitted their work to the Firebird Book Awards. A panel of 12 judges within the writing and publishing space then read every book and independently scored each entry according to a set of standardized criteria that evaluates the quality of the writing as well as production aspects. Only entries with the highest of scores are awarded the coveted Firebird.

Patricia J. Rullo, founder of the Firebird Book Awards, says, “This quarter’s entries were a joy to read and speak to the talent out there. At Speak Up Talk Radio, our mission is to offer radio interviews and podcasting services to help authors expand their reach. In addition to additional prizes, our winners have the opportunity to be interviewed and aired on iHeart Radio, Pandora, as well as 50 additional online venues, giving them new ways to speak up and share their work.”

Pat adds, “We’ve included a charitable component to our awards by making all entry fees tax-deductible to the author. In return, we personally make and send handmade fun and whimsical pillowcases to women and children in homeless shelters via Enchanted Makeovers, a 501(c)3 tax-exempt organization. All entry fees fund this project. In this way, authors can get notoriety for their work while doing good for others. It’s been such a rewarding venture for everyone.”

The Firebird Book Awards run quarterly contests so authors can receive recognition on a timely basis. Authors from all genres, mainstream, independent, and self-published are welcome. Additional winning authors and titles as well as entry information is available at https://www.speakuptalkradio.com

How to Drink from the Fountain of Youth is available in paperback and eBook (English & Chinese) plus the Audiobook narrated by Rich. For information visit www.richtola.com

In addition to respecting yourself – mind, body and spirit – you also need to Respect the Universe if you want to Drink from the Fountain of Youth. It’s also Step 9 of my 30 Steps to Everlasting Youth, and it’s all about extending your self-respect out into the world as it relates to all things living and non-living. Do it, and the Universe will thank you for it.

Now here’s a quick workout anyone can do with a single dumbbell. Peace – R

Every day you wake up is another opportunity to pursue your dreams and begin something new. So follow your heart and make great choices everyone – always – and no doubt heed the words of our President Barack Obama, “Choose to listen not to your doubts and fears, but to your greatest hopes and highest aspirations.”

A special thanks to my photographer Dana Patrick for these amazing new pics. Have an awesome day, and whatever you do, remember to get your workout in! 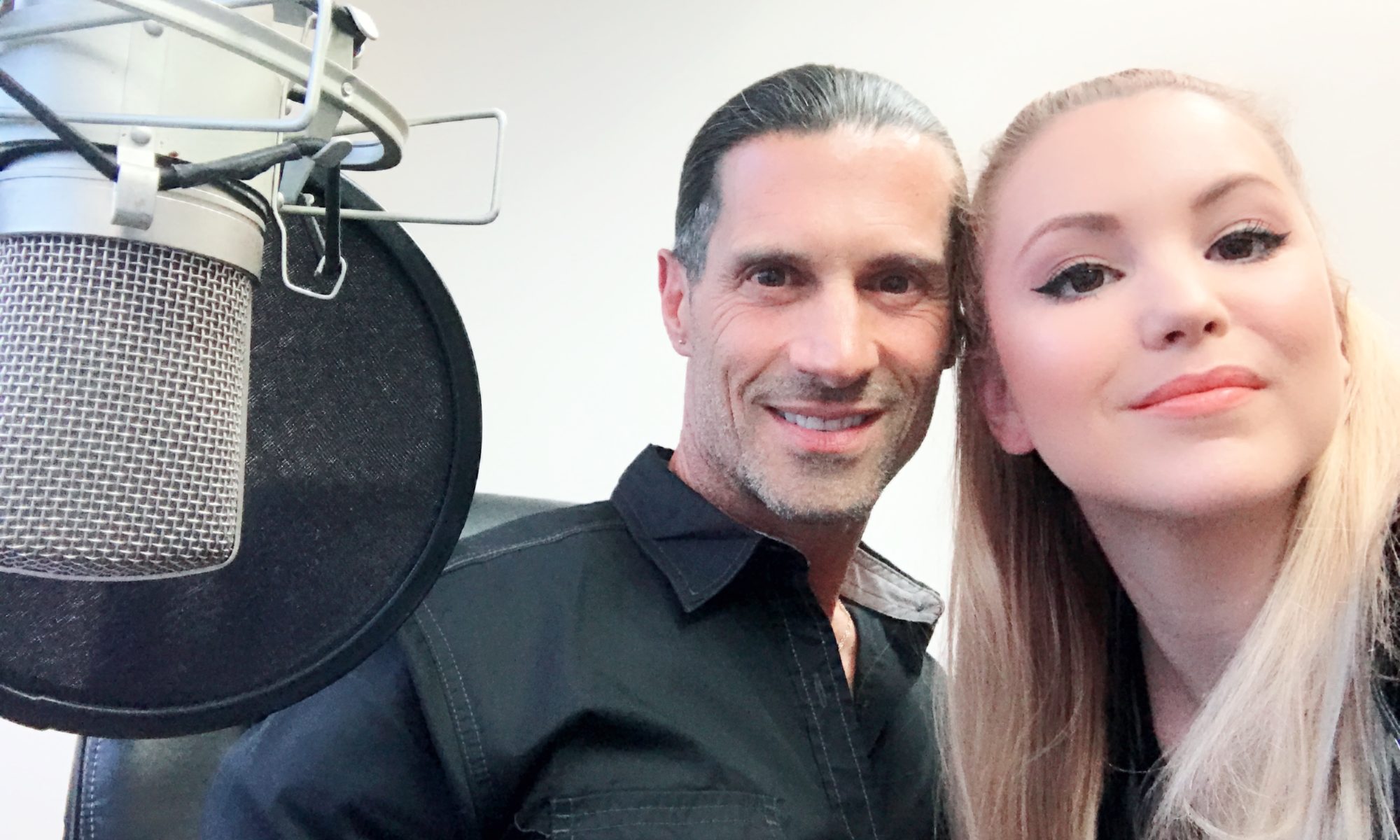 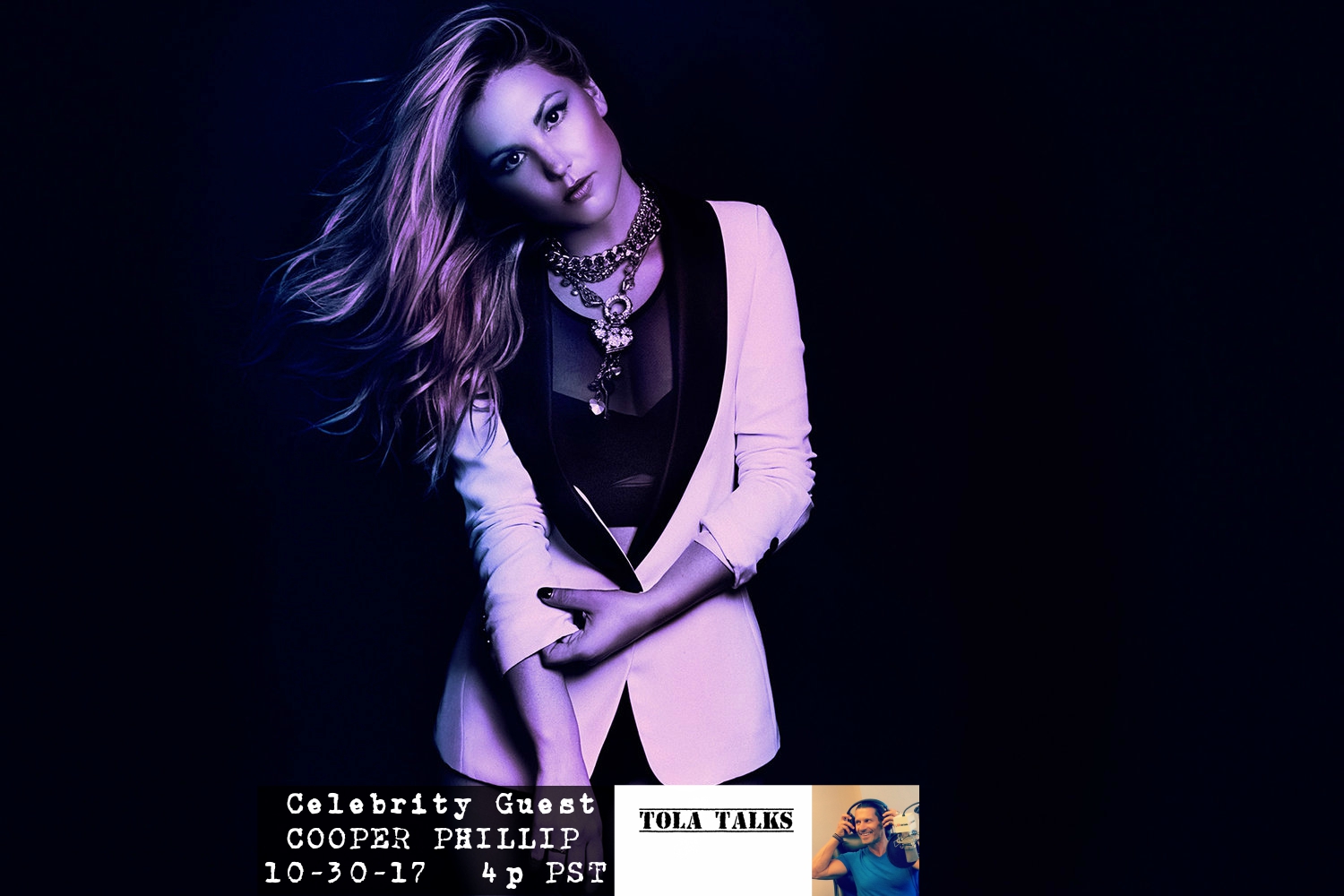 From Russia with Love…join me and the very lovely and talented Cooper Phillip in the studio this Monday on Tola Talks. The fun starts at 4p PST.

Have an awesome weekend everyone!  Subscribe on iTunes, Google Play or Stitcher.com 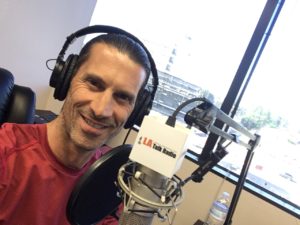 Another great show on Columbus Day talking all things millennial with my good friend and Hollywood writer, Ben Smith.

Since moving to LA LA Land eight years ago, Ben has managed to survive by developing websites while pursing his passion as a screenwriter. He’s also become a much better writer and continues to hone his craft by taking show-runner classes at UCLA.

As a follow-up to last week’s “If I Were President”, I would raise the Federal Minimum Wage and require our unemployed receiving benefits to get their hands dirty, helping America achieve the cleanest streets in the world…no doubt!

In other news, Tola Talks Hollywood movies and gives a 5-star review to George Clooney’s The Ides of March, bestows the The Get Your Shit Together Award to a Judge in Michigan, plus “nudge” theory with this year’s winner of the Nobel Peace Prize in Economic Sciences.

Check it out below…and remember to get your workout in! Peace – R

Chicago, IL: With the filming of YogaStyles of RICH and the Almost Famous: Chicago less than a month away, the show’s creator and world’s best Yogatainer, Rich Tola, announced plans to visit 11 more U.S. cities plus 12 international cities to round-out Seasons 1 and 2, produced through Tola’s company, Two Strike Hitter Productions.

Yoga expert and lifelong fitness virtuoso, Rich Tola aims to inspire everyone on the planet. “It doesn’t matter where you are or what you’re doing, anybody can squeeze in a measly 5 minutes of Yoga everyday, and I will prove that. Spark it up with a quickie, a simple Warrior pose or balancing, plus it’ll help you reinforce a clear and positive mindset throughout your day,” declares Tola. “Not to mention that every practitioner, from beginner-to-advanced, should know the proper body mechanics of every pose, especially the twists, and more importantly, how to come in and out of difficult positions while avoiding injury.”

Tola and his band of beautiful “Yoga babes” appropriately called The Namaste Five, will also be demonstrating creative and challenging sequences with Rich leading the charge. While most of his teaching will be done to unsuspecting residents and tourists nearby historic landmarks and major attractions, Rich and his rockstar yoginis will take you to a new level, “We’ll show you how to make the hard stuff look easy,” Tola said.

Since becoming a Certified Yoga Teacher in 2006, Rich has taught more than 25,000 students in over 2,000 classes throughout the United States. He also produced nearly 30 hours of instructional videos and DVDs including his film, Boulevard Zen (2009). Rich received BSE from The Wharton School (PENN) and MBA from The Kellogg School of Management (Northwestern).

For more information please visit our website, YogaStyles.tv, or listen to Rich and his students, Rhonda and Vika, talk about YogaStyles on WGN Radio 720AM, The Frank Fontana Show on July 26, 2016. (click HERE to visit the WGN website).